Get Your Scare On: Knott's Scary Farm 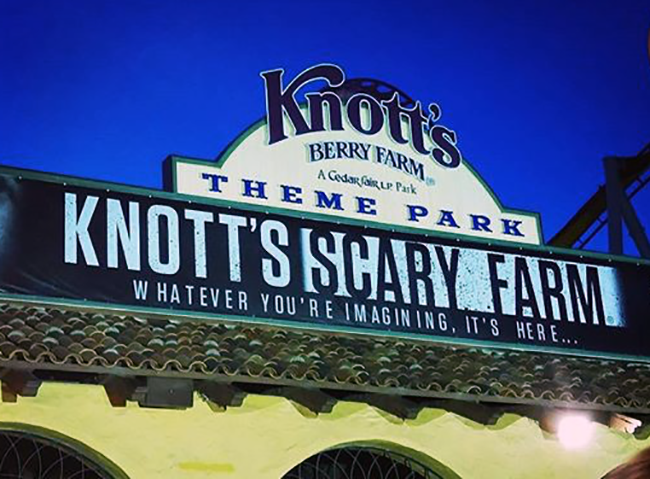 When October rolls around, there's always one haunt event that is a must-- Knott's Scary Farm Halloween Haunt. This year's event brought 11 mazes, 3 scarezones and 1,000 monsters wandering the park, lurking in dark corners, ready and waiting for the unsuspecting as you make your way through the streets of Ghost Town. One of the best haunt attractions in SoCal, the mazes keep getting better and scarier. Read on for my review on this year's spooktacular event! 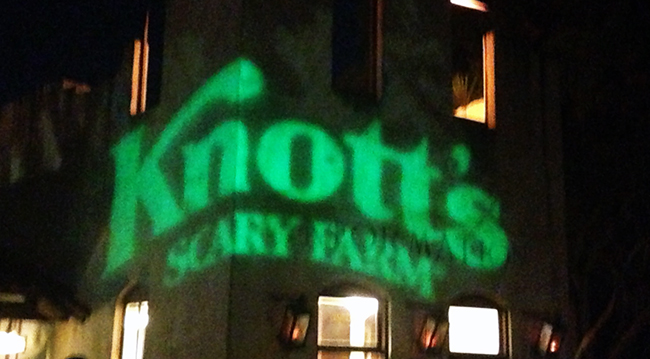 Special Ops: Infected- Patient Zero
Last year, Knott's debuted Special Ops: Infected, an interactive haunt attraction that arms guests with laser guns to fend off flesh-hungry zombies and complete missions along the way with their squad leaders, who bark orders at you along the way. It's back this year with a new mission, better organization, and needed improvements.

Before entering, guests are prepped with the plot (find patient zero to get the DNA to cure the outbreak) and instructed on how to kill the zombies. The laser guns are a big improvement and now track overall kills, ammunition available and allow for reloads but be careful! If you get too close to a zombie, you can 'die' and the gun could deactivate. Luckily there are opportunities to upgrade your weapon's abilities along the way.

While I think the experience as a whole is pretty cool, do come prepared to run, go up and down stairs, walk across bridges and dodge zombies. It can get pretty intense at parts, but is so much fun! It's great to go with a group for some friendly competition on who gets the most kills.

Tip: Make this your first stop when you enter the park to pick up a reservation ticket to return at a specified time. You won't be able to get in without a ticket and they go quick as there are only a limited number of missions available each night. This is one you don't want to miss! 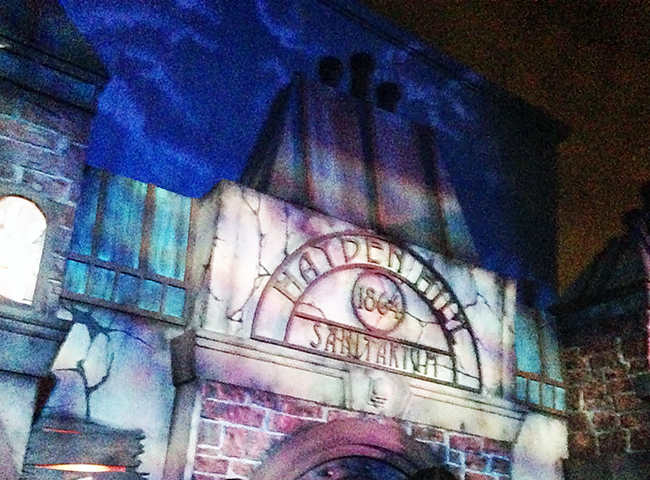 One of this year's newest maze offerings is Paranormal, Inc., guests visit the Hayden Hill Sanitarium taking the part of paranormal/ghost investigators. While standing in line, TV monitors give the backstory on the sanitarium, exposing it's sordid past and current hauntings. As you enter the lobby, one of the Paranormal Inc. crew members shows off a new invention that releases a large amount of electrical energy, hoping that the energy will allow the spirits to appear. Of course, something goes wrong and guests are met with an evil spirit and must escape the sanitarium, choosing one of two storylines (ours was of an evil nurse who tortured her patients, the other side focusing on a wicked doctor I believe).

This maze was really well done-- starting off with high energy and activity causing somewhat of a panic. The story line helped build up anxiety, and the maze itself was extremely well executed. This is a definite must! 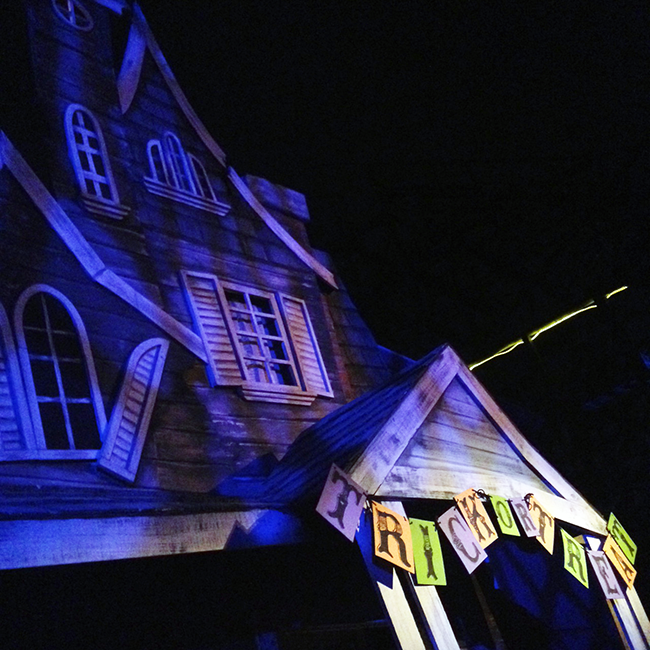 One of my favorites is Trick Or Treat, with it's classic Halloween theme-- pumpkins, costumes, candy, all the good stuff. They amped up the scare factor this year with the Green Witch,  who awaits guests in the attic as they enter the haunted house and travel from room to room. The props in this one are fantastic and really sets the Halloween mood.

Another favorite nearby is VooDoo: Order of the Serpent, which takes you through a creepy New Orleans style Southern plantation home and out to the bayou where unsettling rednecks reside (including a crocodile skinners) and scary black voodoo magic... and human sacrifices... are performed and finally through an old graveyard where monsters crouch in waiting.

Last year saw the debut of Tooth Fairy, a maze in which dental nightmares are made of. The distrubing maze follows the not-so-cute Tooth Fairy as it rips out teeth (among other bodie parts) to add to it's growing collection. Dental drills and screams can be heard all along the maze making it that much more unsettling. I was happy (?) to see the cheesy ending had been changed from last year. If going to the dentist is already uncomfortable, this maze will give you dental nightmares for nights to come.

This year also saw the return of the Forevermore killer, who mimics his horrific murders after popular Edgar Allen Poe tales such as 'The Raven', 'The Tell Tale Heart' and more. I find that this one is disturbing in a psychological way and thought they had stepped it up from last year with more scares and awesome strobe effects. Sadly, I think the theme goes over a lot of people's heads, especially if they don't watch the TV monitors with the special news report that sets up the maze.

We also made our way to Pinocchio Unstrung, which continues the beloved tale of the little wooden boy, only he's not so nice anymore. After his creator Geppetto and the Blue Fairy screw him out of his wish for becoming a 'real boy',  he takes matters in his own hands and goes on a killing spree in order to cover his wooden body with real flesh. Ew. I really like the twisted take on a classic story book tale, and for the most part this maze is pretty cool.. until the end. It gets a bit weird and cheesy with the large animatronic.

Another one with a cheesy animatronic ending is The Gunslinger's Grave: A Blood Moon Rises. Our first maze of the night, this one started out strong, although I wish there were more scares throughout. Knott's revamped this one to include scary, hungry werewolves, which fits the old west theme of this maze well.

The only attraction I was somewhat underwhelmed by was My Bloody Clementine, which takes place in the Calico Mine Ride. In my opinion, this one has one of the best, and disturbing, stories-- darling Clementine was murdered deep in the Calico Mine and her spirit is entrapped in the mine searching for those who killed her. While the special effects and digital projections were cool, the scares where pretty lackluster. Maybe it was because I was in the first car and didn't get to experience the ones the middle and back cars did, but I think Knott's has opportunities to add more throughout and really make this one really creepy.

We missed two of the mazes-- Black Magic, where the demented ghost of Houdini resides to play devlish tricks on guests, and Dead of Winter, a new maze for 2015 where guest encounter the evil Snow Queen and her army of resurrected Viking Warriors.


Shows
If you need to catch a break from the terrifying monsters, be sure to stop and check out the Scary Farm shows. The Hanging is a always must-- bawdy jokes, stunts and special effects. This year's theme 'Straight Outta Calico' takes on this year's most infamous pop culture events-- no one is safe from Tom Brady, Caitlyn Jenner, Jurassic World, The Dress and more. Most of the jokes are pretty bad but you'll find yourself chuckling at a few.

Elvira, Mistress of the Dark also returns to the Ghoul-Time Theater with "Elvira's Asylum," a comedic music-dance fest that takes place in an insane asylum. If you're an Elvira fan, this is a must-see. 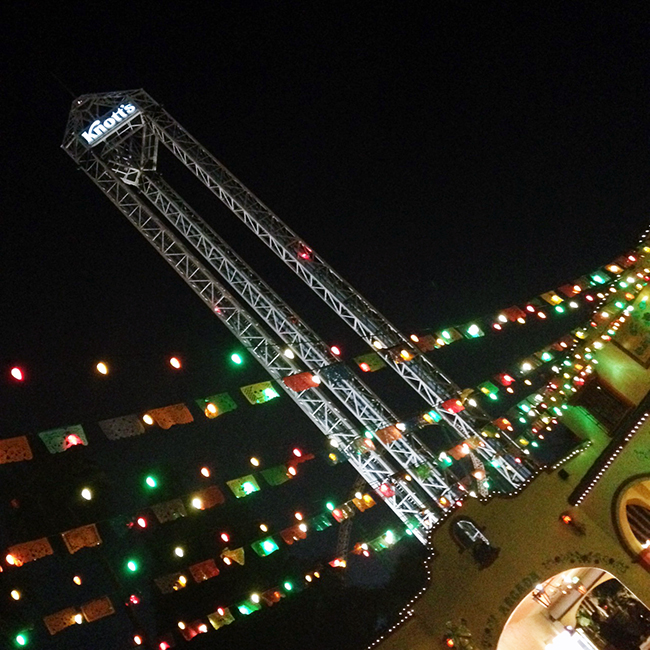 Ready to get your Haunt on? I recommend that you purchase tickets online to save a few bucks and avoid log ticket lines, especially if you're planning on attending during a weekend night. For those that can't stomach the fear, you can join the Halloween fun during the daylight hours at Knott's Spooky Farm.

* I received complimentary tickets in exchange for review, however all opinions are my own. No monetary compensation was provided.